I headed out to do some bird photography this afternoon. I haven’t done much this year…not enough time and lack of birds have been a big reason. I decided today I was going to find a bird and photograph it…and I did. I arrived at Cherry Creek around 3:20pm, and found a beautiful hawk not long after (photos in another blog soon). There wasn’t a lot of bird variety…one GBH landed in the middle of Cottonwood Creek, which was now heavily overgrown with cattails and reeds, making any approach largely impossible. A handful of ducks, mallards and green winged teals, were scattered about. Red-wing Blackbirds dotted the puffy tops of the dried, winter-colored cattails (photos in another blog.)

The event of the evening, however, was the flight of the geese at sunset. Like they had choreographed it, every flock, from miles around, a thousand birds, seemed to take flight at once. Several flocks from right around me all gave off a chorus of honking as they literally, simultaneously took flight…exactly the same moment. Dozens of V’s of Canada Goose flew overhead, for about 15-20 minutes, shortly after sunset. Wave after wave, all heading in the same direction, presumably to the same location. The colorful skies faintly echoed with the honks of leaders and strays. The birds were silhouetted against the sunset…black shapes against flows of red, orange, yellow and a pale blue…pocked with the faint grays of elongated clouds…as if to mimic the birds gliding through the skies. 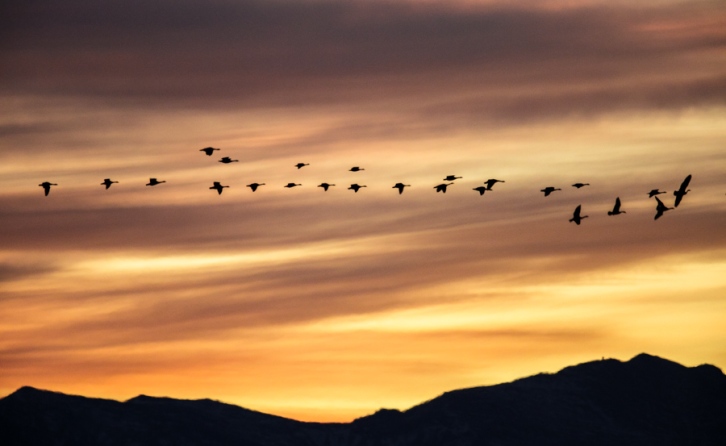 Flight of the Sunset Geese