If anyone out there who has a fondness for birds has ever wondered if there was a more energetic, bouncy, and ridiculously cute bird than the much-loved Chickadee…well, there is. It’s the Bushtit!! Smaller, faster, bouncier, and even MORE energetic! The bushtit, unlike the Chickadee, moves around in a giant horde. Dozens of them flit from bush to bush, tree to tree, and yard to yard with this high pitched mass of chirps. They descent upon suet feeders like starving gray balls of fuzz, devour, and then they are gone as quickly as they came!

Today I had planned to get up early, and hit prairie dog town in Cherry Creek with my blind to see if I could get some good shots of those other fun, fuzzy little creatures. I’ve actually been planning to get out there early in the morning, before sunrise, so I could set up my blind in a good spot, and be ready to go before the ground puppies crawled out of their holes, thus avoiding the perpetual alarm and boring shots. Well, as Earth would have it today, she decided to snow. Snow wasn’t in the forecast, but when Earth decides to do something, there really ain’t no stoppin it. So, it snowed…from about 6am until after 3pm. Got a good three inches. One thing that’s good about cold, snowy weather…the birds feed, like mad they do.

I decided to set up shop in my back yard again. Last year (well, December 2012, now) I spent quite a bit of time in my back yard with a rented 500mm f/4 L II lens (the lens that sent me down the inevitable path of buying my own 600mm f/4 L II!) I captured a bunch of great photos last year. This year, I’ve been absorbed in trying to start a new business, two of them, actually…freelance web development as well as turning my photography into a business (the latter of which, hopefully, will have a storefront site up and running for soon.) Today was the first day all winter that I watched and photographed the “backyard birds”, and it turned out to be a pretty good day. I’ve heard the bushtits moving through for months…its a mad chirpathon when they do, dozens of high pitched little squeaks for a few minutes at a time several times a day…but I’ve never captured any decent photographs.

Well, as you can see, today I captured some great shots of these energetic little gray fuzzballs! They are as fearless as Chickadees (which is to be expected, as they are part of the same family), at least as rouckus, and immensely curious. They blasted through as I was in the middle of setting up my “setups”…an old wood stump and some branches hanging over feeders so birds will perch on something nice and out in the open for easy photographing. I hopped over to my lens, and immediately the horde decided to investigate this wonderful new thing in the middle of the yard. Half a dozen bushtits were crawling and hopping all over my setup, curiously investigating every nook and cranny. Seeing as I had not yet put any food within this wonderful new contraption, they all blasted off and descended upon the suet feeders, pecking away en-masse at the tasty fat-covered morsels. 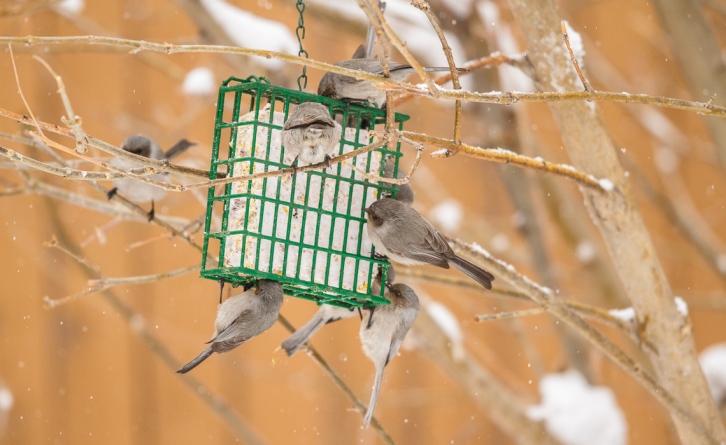 Descent Upon the Suet! 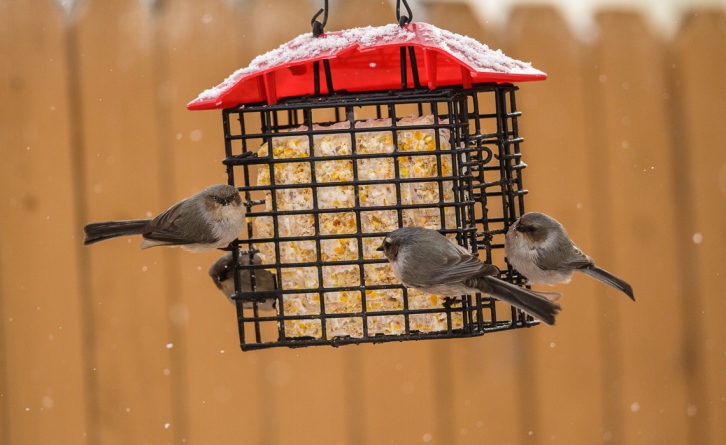 Descent Upon the Suet!

When they aren’t gobbling up suet or investigating new and interesting things in the yard, bushtits live up to their name quite well…titting about in the bush: 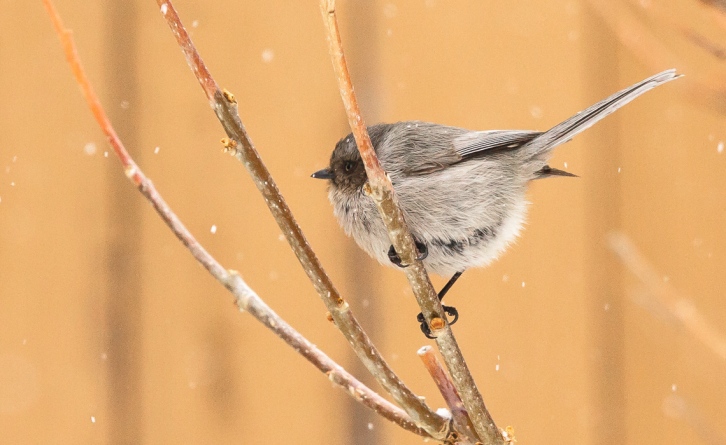 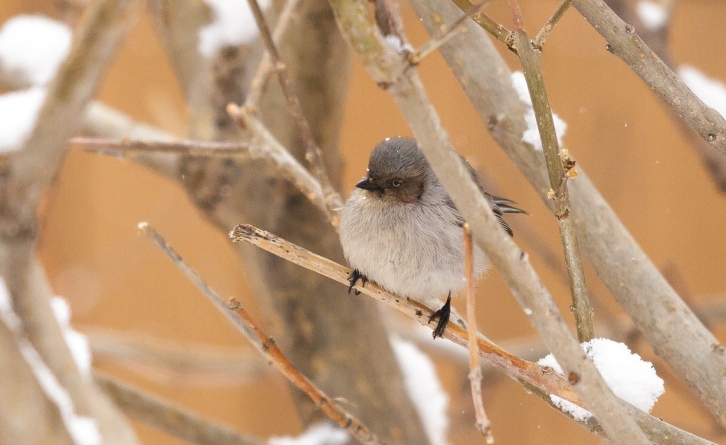