Yesterday I wrote a bit about my latest visit to Cherry Creek. The Cottonwood Creek wetland area was recently redone, and after a major rainfall it was full, both with water and a wide variety of birds. I wrote about the Kingbirds yesterday, however they were hardly the only birds there. I encountered three different varieties of Heron as well, including Night Heron, Great Blue Heron, and Snowy Egret. The latter are a common bird to Cherry Creek, and I’d encountered a Great Blue or two in the past. I’d never seen Night Herons myself, although I’d heard they sometimes hung out around Cherry Creek and Chatfield.

Herons in general are fairly skittish birds, and they have very large comfort zones. If you breach their comfort zone, even a little, they will usually take flight and find more secluded ground. Being a novice, I don’t have much in the way of technique when it comes to getting close to skittish birds, so I scare them off all too frequently. Part of that is the nature of Cherry Creek’s wetlands…they are all man-made, with lots of man-related stuff around them…bike paths and roads and the like. The birds tend to hide in the most secluded little pockets, which are usually pretty well hidden with only a few…very obvious…approaches. It’s tough to get close if you can’t hide in the first place. I’m sure there are some tricks of the trade that I’ll pick up in the future to get me closer, and capture more interesting moments in the life of a beauty like a Great Blue Heron.

When I was creeping about the new Cottonwood Creek wetlands, trying to be stealthy, I scared off a whole bunch of herons as my head popped unhidden over the rise I was climbing, Great Blues, Snowys, and Nights. They had all been feasting at a small pond just north of the wetlands (where a man-made regulator pump controls water flow into Cherry Creek Reservoir from the wetlands and creek) that was PACKED FULL of fish. Tons of fish, so many that they did not all seem to fit in the water. You could see fins and scales momentarily pop out of the water every few seconds as fish slithered across each other. It was a curious sight. It was only a moment later after I’d finished trying to capture a few shots of the various birds in flight, that I heard splashing.

For some odd reason, the fish seemed to be trying to swim back up the outlet of the flow regulation system that was pumping water from the wetland into the pond, which was sending water north into the reservoir. These rather large, 18-22″ fish would race towards the gushing outlet, only to fly past it onto the bank, then flop their way back into the water. I had a hard time getting any decent pictures of this event, as each time it I heard a splash it was already too late to catch a flying fish. I did catch a couple shots of flapping, flopping, slithering fish as they wriggled back towards the water. 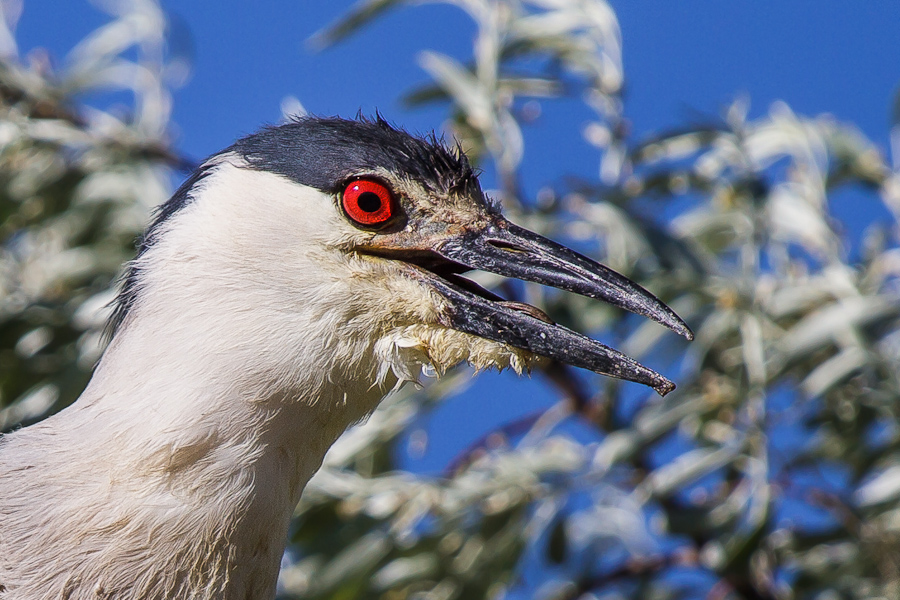 In the mean time, as my attentions had turned to the water, it turned out that one of the Night Herons had circled around, and landed on one of the trees overlooking the pond. I heard a scratchy, throaty call, and slowly looked up to see a brilliant, ruby-red eye staring down at me from a very close distance. Night Heron’s are not the largest herons by far, but up close with fiery-red eyes they are momentarily intimidating. I managed to capture a few shots of the beauty before it took flight, however it simply circled again and landed only slightly farther away, offering another photo opportunity. I count the shot below as rather lucky, a full-body pose with a nice, softer background.

Based on the photo above, and the fact that it was taken in Colorado, this guy is a Black-Crowned Night Heron. There is one other variety, the Yellow-Crowned Night Heron, that rarely shows up in Colorado during their summer breeding period…but it is a rarer occurrence. Even the Black-Crowned variants are less common here in Colorado. The more ubiquitous herons of Colorado are the Egrets, particularly Snowy Egrets. Those birds are all over Colorado, wherever they can find fish-filled water to wade and hunt in. Cherry Creek and Chatfield both seem to be havens for Egrets.

These brilliant white waders love the shallow waters of the various Cherry Creek wetland areas, as well as the shallower shores of the lake. Their black bills and the yellow patch around their eyes give them away as Snowy Egrets, where as Great Egrets, a larger variety, have entirely yellow bills most of the time (with a green patch around their eyes during breeding season). Sadly, Great Egrets don’t spend much time in Colorado…it is one of the few states, including Colorado, Utah, Wyoming, and Montana, that they don’t frequent. While I love their smaller and more delicate cousins, male Great Egrets have quite an amazing display during their mating season that I’d love to photograph. (I guess that will have to wait for some future bird photography trip.) 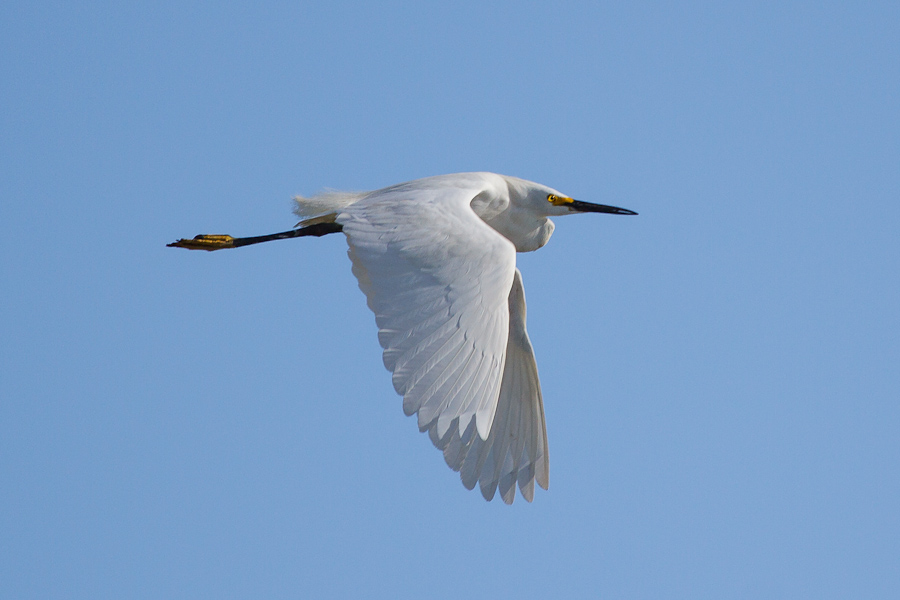 In addition to the herons, I also encountered a variety of other birds. A couple I’d been hoping to see, such as sand pipers. More on that tomorrow, with the third and final installment of this series of blogs.