Last weekend I spent the day in Cherry Creek State Park. I managed to identify quite a number of bird species, and left at the end of the day with both a bunch of photographs as well as greater experience photographing birds. This weekend, I headed out to Chatfield State Park, and learned far more than I could have at Cherry Creek. Today was, without question, a day of weather. LOTS and LOTS of weather!

The day started out ok…when I left my house shortly after 9am it was a little overcast, however there was spotty sun and it looked to be clearing, which would have meant for a nice, partly sunny day (good lighting for photography.) By the time I reached Chatfield, almost an hour later, the sky had darkened considerably. By the time I parked, set up my camera, and started hiking around the riparian areas just south of the lake, it was raining a cold rain. Throughout the rest of the day, I would see pretty much every kind of spring weather one could imagine: rain, sleet, snow, and a couple of times even dime-sized hail! The winds varied from non-existent to nearly-knock-you-off-your-feet 80mph blasts, turning cold sleet into natures icy sandblasting. The featured photo of this article demonstrates the hellish weather, along with the most ubiquitous, and for that matter resilient, resident of Chatfield: The American White Pelican.

Despite the hairy weather, I think I learned more about photography, particularly how to photograph birds in flight, than I have since I first picked up a DSLR about three years ago. I also learned the true value of having professional-grade camera equipment like the Canon EOS 7D and Canon EF 100-400mm L-series lens. Both are weather sealed, which means they are generally protected against the environment, and can handle things like rain. It turns out they can handle far more than that…there were times when both my lens and camera were completely drenched, covered in snow or sleet, and getting just as much of the crap kicked out of them as was getting kicked out of me! I had to work really hard to keep the camera steady, focus, and even track birds in flight at times, as the wind was just wicked during the worst parts of the day. Advanced gear really helps out in that area, with high tech features like high speed automatic focus and image stabilization in the lens which helps counteract the effects of me shaking the camera while trying to get a shot. Well, enough about camera gear. On to the photography.

Chatfield, at least today, did not appear to have quite as diverse a population of birds as Cherry Creek. My primary goal was to find Great Blue Herons, a very shy but also rather majestic bird, as well as Double-Crested Cormorants. Both are known to breed at Chatfield each year, and at times there have been very large colonies of both birds nesting in the trees. I think I was a bit early for that this year, given the weather, and the fact that there did not appear to be any nests for either of these two birds anywhere. Overall, I managed to identify the following birds:

When I first started hiking, I wasn’t really sure where to go. I have driven around and past Chatfield countless times, often to go to Roxborough State Park…a park far less known than Chatfield. I had never actually entered the park, however, so it being my first time I had to figure out where the birds were. That took a bit of exploring. I started following some of the paths from where I parked my car, which lead me through an area full of great macro shots of the newly-greening flora. (I’ll post a gallery of those soon.)

Along this initial hike, I could hear a bird that I could only catch a few glimpses of. It was fairly small, dark blue, and had a fairly distinctive call. At the time I wasn’t sure what it was, however a little searching after I got home indicated it was a Belted Kingfisher. This was another bird I really wanted to photograph, particularly with a catch…but I could really only hear it, and the few times I did get some photographs it was high overhead silhouetted against the relatively bright sky. The trail I was headed down wound alongside one of the inlet rivers of the riparian area south of the lake, and ducks were lazily meandering up and down. They were always careful to stick to the far shore when they spotted me, however one couple, a drake and his gal, were obliviously preening away on a log:

I like this shot. It could have been better if the water lacked all the ripples and allowed for a clear reflection, but that aside, I think it was a nice moment. The shot above was taken at the very moment I accidentally snapped a twig while trying to re-position, and the female in the back immediately stuck her head forward and froze, looking for a predator. Thanks to a nice, warm camoflage coat and a shroud of nearly-matching brush, I don’t think she actually saw me, and went back to preening a few moments later. Also along the same trail I heard another flock of chickadees. This time, the males seemed to be in mating plumage, a bright, vibrant yellow streak of feathers down their sides. I really love the chatter of chickadees…its intriguing, and at the same time a little relaxing.

The really great shots of the day were of the pelicans. These are an odd mix for a bird…majestic, yet at the same time a little ugly. You never really know how large an American White Pelican is when they are all folded and curled up, floating on the water. They look large…but when they fully unfurl and spread their wings, they are true giants. This realization really hits home when you see a Juggernaut of a bird cruising less than 15 feet overhead! 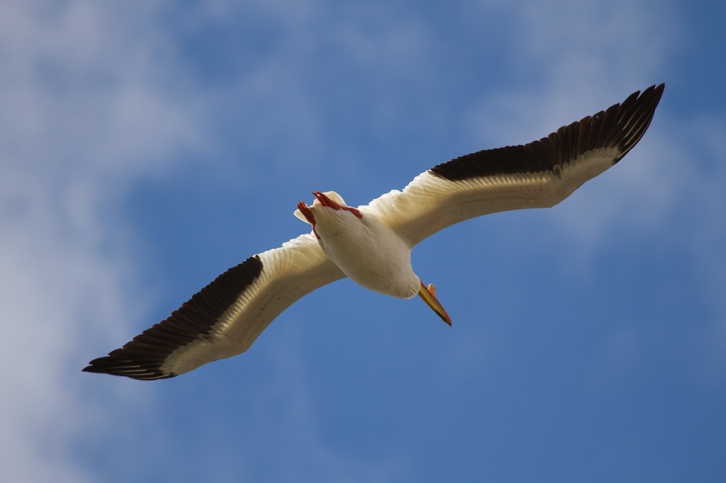 The shot above demonstrates the nine-foot wing span these huge creatures have. The bird came out of nowhere around a tree, and was cruising rather low to the ground, less than 15 feet over my head. I had only a moment to swing the lens up, focus, and fling off as many shots as I could. It was already too late to get a shot with its head in clear view…but I was rather surprised to find I’d managed not only to capture the bird fully in-frame, but also capture one of the few moments of blue sky throughout the whole day. The pelicans are definitely the bird of Chatfield. There are more than a few, floating, swimming, and flying everywhere. Their bills are pretty ugly, particularly the males, but once they start flying, its hard not to call them a majestic bird. Their glide is effortless, silent, and smooth. 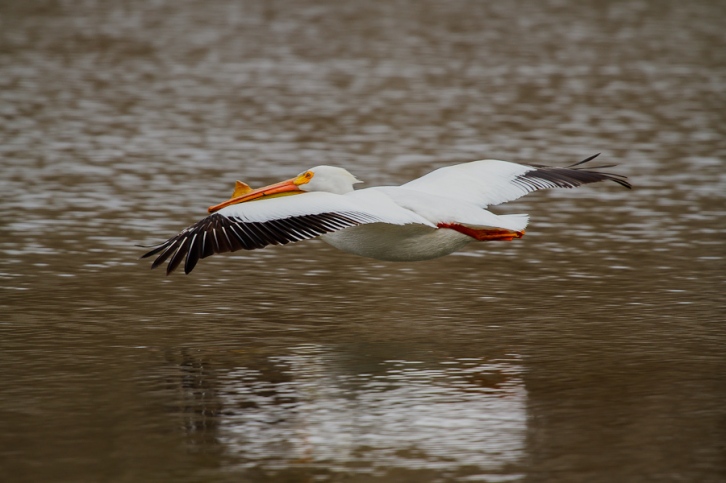 I was unable to get any decent shots of the herons. They are very secretive birds, and are very sensitive to human activity. The few times I’d noticed one, they had also noticed me, at which point its best not to try encroaching into their comfort zone any further. Sadly, I wasn’t the only nut out around the lake on such a crazy day. Quite a few nutcase fishermen were out and about as well, and entirely uninterested in the feathered residents, were frequently crashing through the underbrush and along shorelines looking for a good spot to fish. Despite the fact that overall there were probably only 20 people out around Chatfield that day, one of those fishermen always managed to find me at the same time I found a heron.

On the flip side, Cormorants are rather fearless birds, and there were plenty of them around to photograph instead. Near the end of the day, after hiking around for hours on end, I decided to give my feet a rest and sat down on the shore of an inlet. It didn’t take long for all the birds in the area to become accustomed to my presence, and they swam nearer and nearer. That gave me the opportunity I was looking for, and I managed to capture some photos detailed enough to show off the amazing blue eyes of the Double-Crested Cormorant.

Like the herons, it seemed too early for there to be any nests. It did appear that the cormorants were coupling up, and there will probably be nests and baby birds within a month or two. It may be that these birds, both the Double-Crested Cormorant and the Great Blue Heron, have found ways to isolate themselves from human eyes. At one point in time they had large colonies along the riparian shore, well within sight trails reachable by people. The herons seem to spend most of their time out one one of the numerous small islands dotting the lower extremities of the lake, well out of reach of any prying eyes. It seems the cormorants spend a lot of time in the same areas, or in the thick woods on some of the fingers of land that stretch up into the lake from the riparian region…also out of reach of prying eyes. If I have a chance to get back to Chatfield before they nest and raise their young, I’ll have to see where they actually end up nesting.