Its been almost a month since I was last able to get out and about with my camera and do some photography. I managed to hit Cherry Creek again today. Seems the weekend is the only time I really have to get out and shoot some photos, and as its still winter, there are fairly few weekends when the weather doesn’t interfere. Today was a pretty nice day…spring-time warm, no real clouds in the sky. Definitely a better day to do some photography than the last time I captured any photos.

I’ve headed out to Cherry Creek a couple times since then, however the birds were either scarce, or well out of opportunistic photography range. I was out in the park from about 1:30 till after 5, and managed to get quite a few good shots. I treat every outing these days as practice, a chance to learn more about bird photography and tracking birds in flight. Today was quite a success. My photos, particularly those in flight, are sharper than they were when I first tried bird photography in January. They were more colorful today as well. I believe I saw the following species today:

The pheasants were probably some of the more amazing birds I managed to capture today. I saw both a male and a female. The make was moving through the brush, and I managed to get one shot off before he noticed me and took flight, however I was quick enough to get another sequence of shots of him in flight. The featured image of this post if the male pheasant in flight. I hope I see these beautiful birds again when I am a more skilled photographer, as their feathering is astonishingly colorful and detailed. 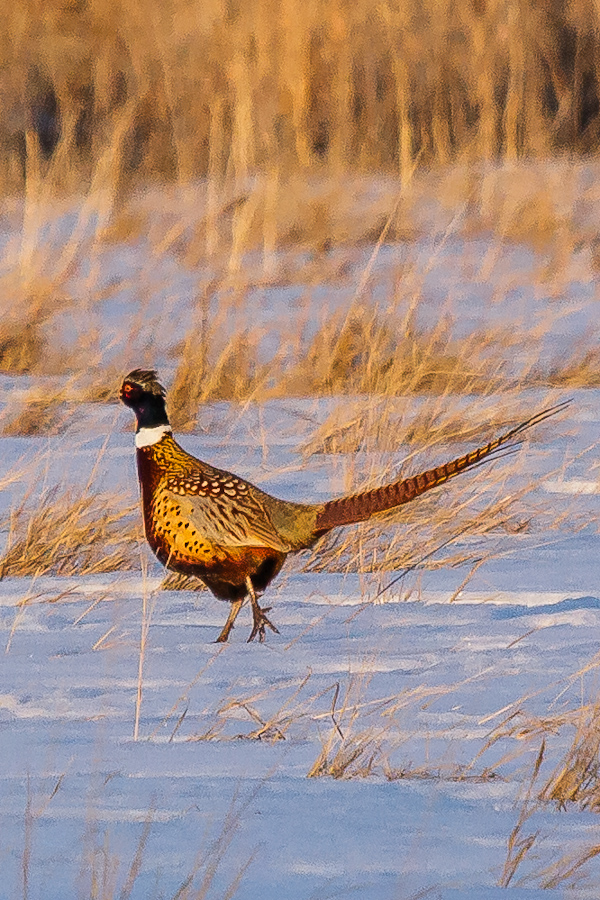 When I turned around from photographing the male pheasant, a female was in fight right behind me. I managed to get another sequence of shots of her as well. Far less colorful than the males, its really quite amazing how well these birds blend into their surroundings…as evidenced by the photograph here: 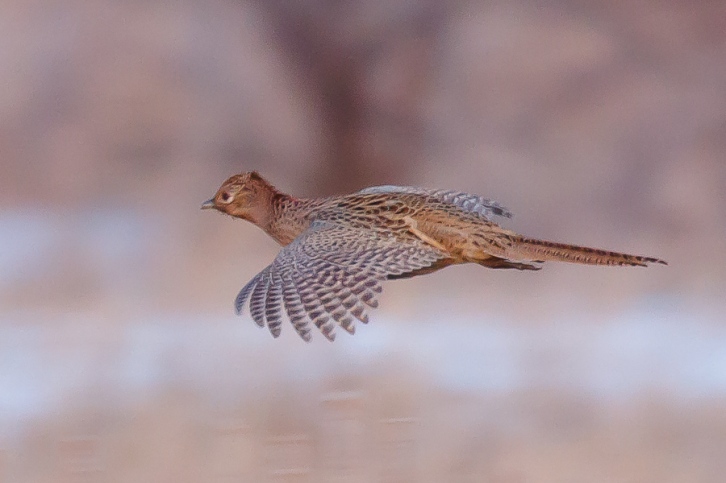 I think I was fairly lucky to get any shots of pheasants at all. They are very skittish, shy birds, and usually the moment you spot one is also the moment its gone again. I may have to use a blind of some kind to photograph any in any real detail in the future. However, I’ve started this blog off with the end of the day, as I saw the pheasants when I was heading back home from the lake. Working backwards, shortly before I found the phesants, I managed to get a nice shot of a redwing blackbird in some dried reeds…singing his evening song. For a blackbird, these guys have some brilliant color:

Earlier in the day, I honed my bird-in-flight (BIF) skill on the endless numbers of ring-billed gulls that seem to thrive in Cherry Creek during winter. I managed to get a ton of photos…gulls, at least these kinds of gulls, are an odd lot. You can see some of their antics in the gallery at the end of this blog. However two of the most amazing shots of the day were of a gull in flight overhead, framed against a deep blue sky:

These two shots were near the end of my practice session along the lake shore. I think I managed to hone my skill pretty well…these shots are fairly sharp, decently exposed, and the eyes are sharp and clear! I was rather intrigued by the coloring on these birds wings as well. In the first one above, you can clearly see two very round circles of white framed against the black tips of their wings…surprising how circular those spots are.