I went back to Cherry Creek today to learn more about my new Canon 7D. It was fairly late in the day yesterday when I went out, and I was only able to capture some basic silhouettes of birds against the sunset sky. They weren’t bad shots for a first try, but given how much better the 7D is over my 450D, I figured I could get some much better shots. It was a cold day, although not nearly as cold as some I’ve experienced at Cherry Creek Reservoir during winter. I’ve seen temperatures down to around -20°F over the lake in years past, when the ice was solid a foot thick or more across the whole lake. There were a surprising amount of birds about this year, most hanging around the edge of the ice near the few areas on the lake of open water. I noticed at least the following species today:

I believe there were some Wild Mallards and Northern Shoveler’s as well flying around, but they zoomed by faster than I was able to handle and never seemed to land on the lake. The bald eagles were hanging out pretty far out on the ice, near the middle of the lake. I managed to get a few shots of one of them from a very great distance. The shots here are considerably cropped, and sublimating water from the lake ice created quite a haze, so don’t look for quality in these shots. (The eagles, what seemed like two bald eagles and one golden eagle, looked like small brown spots on the lake as far as my own eyes could tell…while they were still too far to get a useful photograph with my camera, it sees better than I do and the photos were good enough for identification. The bird I believe was a golden eagle flew off before I had a chance to get a shot.) 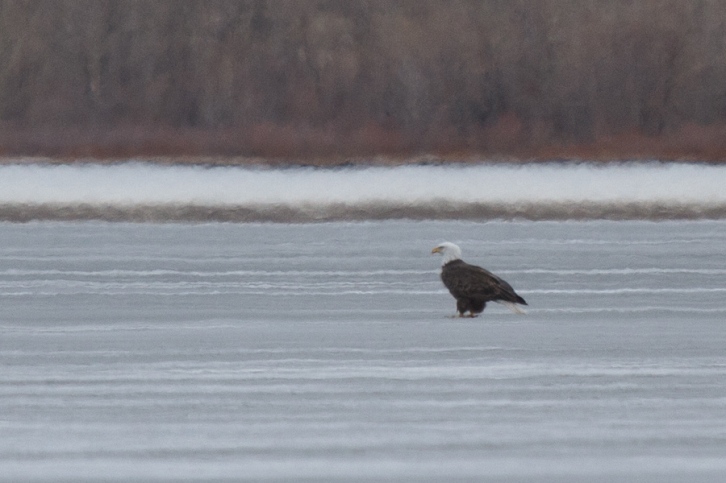 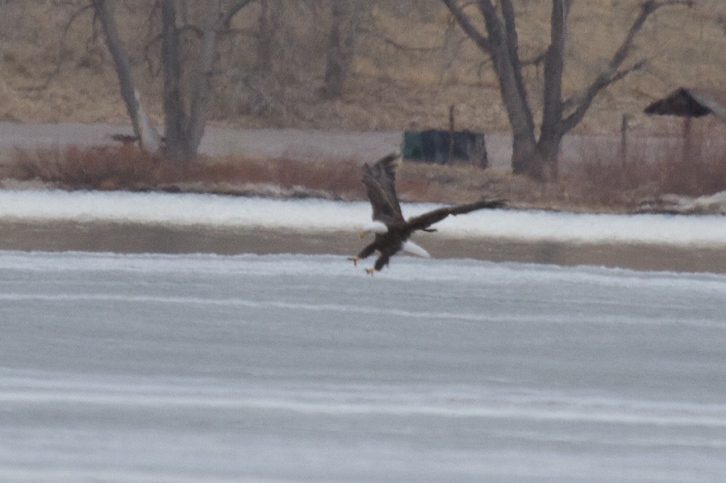 In addition to the eagles, which are a fairly rare sight around these lakes busy with human activity, there were a number of hawks around. There was a Cooper’s Hawk out in one of the fields that is usually a cattail marsh during spring and fall. It was off a ways, too far to get a decent shot. There were also a couple of Red-tailed Hawks hunting around the lake. I managed to get a few good shots of one of them. The featured image of this post and the shot below are of the same rather beautiful bird. (The exposure is pretty terrible as the sky was a light, overcast gray, which doesn’t make for a great bird photo on any day): 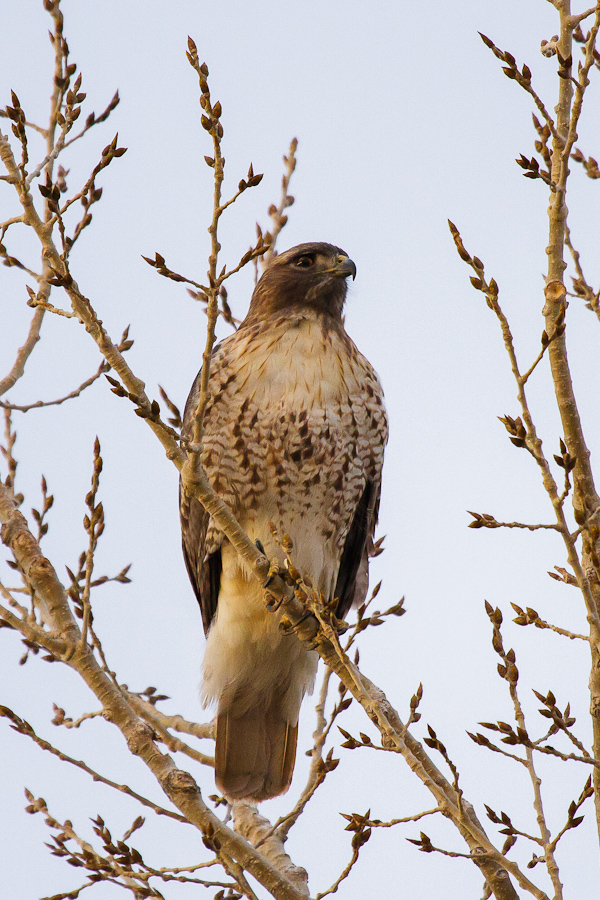 I managed to get some good shots of the gulls (Ring-billed gulls in this case…I did not see any other types of gulls), the geese, and of a Red-tailed Hawk. The gulls are fairly easy to photograph in flight…they don’t zip around as fast as the ducks and geese. They tend to float around looking for the next meal they can steal or scavenge. Feisty little birds, for sure. The geese are a rather boring bird in the grand scheme of things (at least around here, they are everywhere this time of year), but they were an interesting subject today.